An all-inclusive Deluxe Romantic Honeymoon across the beautiful Ecuador mainland culminating in a beautiful cruise around the Galapagos Islands. All meals, deluxe suites and all private services are offered in this outstanding honeymoon getaway. 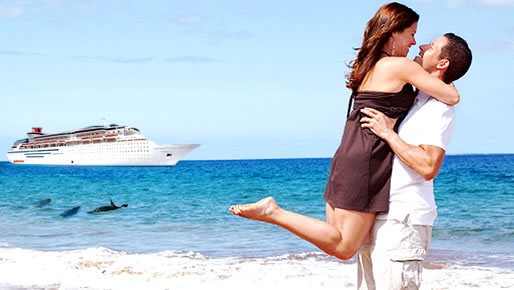 Arrival in Quito, reception and transfer to the Mansion del Angel Hotel; a beautifully restored mansion house dating from the 19th century. Accommodation in a suite complete with antique furniture. A complimentary bottle of chilled champagne will be waiting for you.

After breakfast, a half day visit of colonial Quito, declared by UNESCO as a world heritage site in 1978. A visit to the Old Town, including the Plaza de la Independencia; Parque Alameda and Plaza de San Francisco. You shall also visit La Compañía, the finest of all Jesuit churches. If time permits, we shall also visit some of the markets including the Indian market and the Ipiales market (best visited on Wednesdays and Saturdays, the main market days). Lunch at the Patio Andaluz restaurant before a visit to the middle of the world monument concludes the day. Return to your hotel.

After breakfast, we head north towards Cotocachi, and the marvellous La Mirage Garden Hotel and Spa, the only Relais & Chateux group member in Ecuador. Accommodation in a suite. After lunch at the hotel, you will have an option to visit Cotocachi, the leather capital of Ecuador to purchase many fine products. If you prefer, you may wish to stay at La Mirage; with its elegant and unique covered Pool and Spa Area, decorated in Roman Style, La Mirage Spa offers 11 different types of massages and treatments, including reflexology and aromatherapy. Choose among the many spa treatments or just relax and enjoy the setting of the spa. Dinner and overnight accommodation. 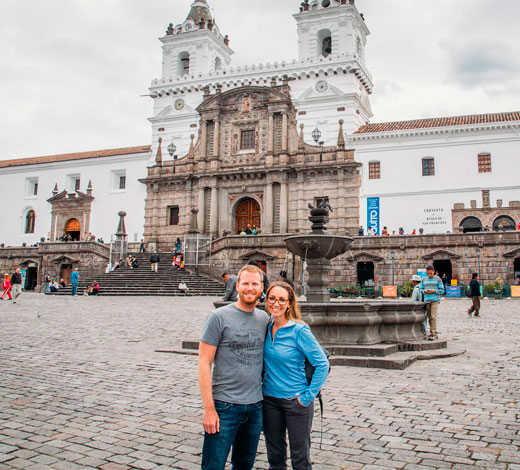 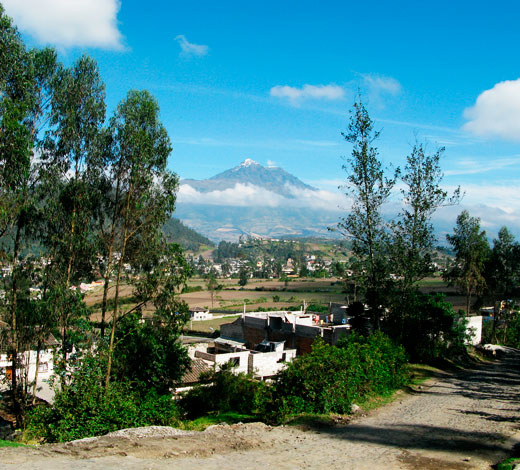 After breakfast, a visit to the condor reserve at Espejo. You may choose to play around of golf at the 9-hole course at Yaguacocha, a little horse riding or simply enjoy more treatments at the Spa. Lunch, dinner and overnight accommodation.

After an early breakfast, return to Quito for the flight to Cuenca , the most beautiful city in Ecuador. Transfer to the beautiful Santa Lucia Hotel, a turn of the century Mansion. Accommodation in a beautifully adorned suite. After lunch at the hotel, a guided sightseeing tour through colonial Cuenca. The old centre has many churches and homes dating from the 16th and 17th centuries lining its cobblestone streets. Cuenca is the cultural and arts centre of Ecuador, an UNESCO world heritage site. A visit to a museum of your choice concludes the day. Dinner at Villa Rosa, the finest restaurant in town.

After breakfast, we continue the journey to the famous Inca ruins of Ingapirca, the most important and the finest preserved Inca ruins of Ecuador. Cuenca was the second most important city in the Inca Empire after Cuzco and was known as Tumipamba. The site of Ingapirca is widely regarded as another temple of the sun or Qoricancha, similar to the more famous site in Cuzco. Visit of the entire complex before lunch at a local restaurant. Return to Cuenca and your hotel. Romantic candlelit dinner at the hotel.

After breakfast, transfer to the airport for your flight to Guayaquil and your connecting flight to the Galapagos. Arrival to San Cristobal, travelers pass through an airport inspection point to pay the National Park entrance fee of USD100 (unless prepaid). Your Guides will meet you, collect your luggage and escort you on the short bus ride to the harbour. Motorized rafts, called 'Pangas' will transport you to the Motor Sailor Alta, which will be anchored at Puerto Baquerizo Moreno. Naturalist's briefing on the next day's Cruise followed by a welcome cocktail offered by the Captain and dinner.

One of the oldest of the islands, Hood is small and flat with no visible volcanic crater or vent. Punta Suarez is one of the most outstanding wildlife areas of the archipelago, with a long list of species found along its cliffs and sand or pebble beaches. In addition to five species of nesting seabirds there are the curious and bold Hood Island mockingbirds, Galapagos doves and Galapagos hawks. Several types of reptiles, including the brilliantly colored marine iguana and the oversized lava lizard, are unique to this island. When heavy swells are running, Punta Suarez is also the site of a spectacular blowhole, with thundering spray shooting 30 yards into the air.

Gardner Bay is on the eastern shore and has a magnificent beach. This beach is frequented by a transient colony of sea lions, and is a major nesting site for marine turtles. Snorkelers will find lots of fish and sometimes turtles and sharks. You will pass the only nesting sites in the Galapagos of the waved albatross, huge birds with a 6-foot wingspan.

Santa Cruz is the only inhabited island to be visited during this Galapagos cruise. Puerto Ayora, with a population of about 10,000 people is the location of the Charles Darwin Research Station, world famous for its tortoise breeding programs. After touring the Station, journey by bus into the highlands to Los Gemelos the two deep pit craters situated in the Scalesia forest with lots of interesting bird life. Go for a walk through the giant lava tubes; visit the Tortoise Reserve to search for giant tortoises in their natural surroundings. There will be some free time to explore the town of Puerto Ayora on your own. 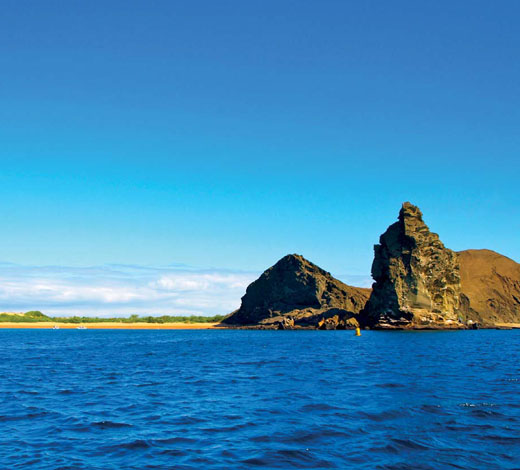 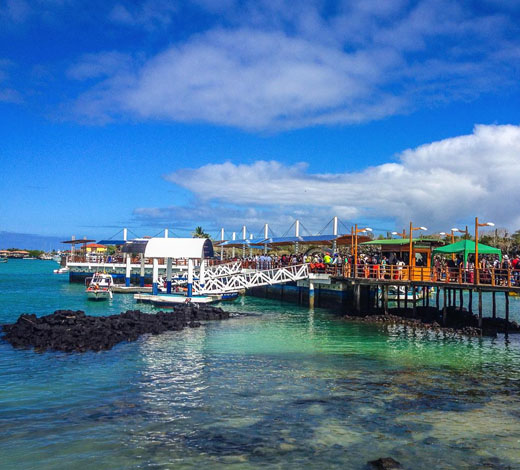 Punta Cormorant offers two highly contrasting beaches; the landing beach is of volcanic origin and is composed of olivine crystals, giving it a greenish tinge. At the end of the short trail is a carbonate beach of very fine white sand, formed by the erosion of coral skeletons; it is a nesting site for green sea turtles. Between these two beaches is a salt lagoon frequented by flamingoes, pintails, stilts, and other wading birds. An old eroded volcanic cone called Devil's Crown is a popular roosting site for seabirds such as boobies, pelicans, and frigates and it is not uncommon to see red-billed tropicbirds in rocky crevices. The center of the crown is an outstanding snorkeling spot teeming with sea lions and colourful fish.

The forces of the Galapagos volcanoes can be easily witnessed here. Afternoon outing (dry landing) for a medium length walk at Punta Moreno (west of Isabela Island) to observe unique lava flows and small lagoons with bird life. Those who do not wish to take the shore excursion may enjoy a panga ride along the shoreline to observe birds and marine iguanas. Evening conference and dinner. Weather permitting, stargazing on deck.

Urbina Bay is an easy wet landing on a gentle sloping beach. This area is very interesting in that it is a perfect example of the geological activity of the islands. In 1954 over 3 miles (5 kilometers) of the marine reef at the edge of the shore were uplifted by 13 feet (4 meters).

Fernandina is the youngest and most active volcano in the Galapagos with eruptions taking place every few years. The flat lava of Punta Espinosa offers a stark and barren landscape, but here flightless cormorants build their nests on the point, sea lions sprawl on the beach or play in the tide pools and marine iguanas dot the sand.

On the towering cliffs of Tagus Cove, 19th and early 20th century ships' graffiti can be seen. After hiking beyond Darwin Lake, a saltwater lagoon above sea level, you will be rewarded with extraordinary views of Darwin and Wolf volcanoes.

This island has several sites to visit at the western end of James Bay. Puerto Egas with its black sand beaches, the salt crater wich is an excellent opportunity to sight land birds such as finches, doves, and hawks. A walk down the rugged shoreline, especially at low tide, will turn up many marine species as iguanas basking on the rocks and sea lions lazing in the tide pools. At the end of the trail there is a series of grottoes or sea caves where fur seals and night herons are found resting on shady ledges. Just north of James Bay is Buccaneer Cove, a particularly scenic area of steep cliffs and dark beaches.

Bartolome is a small island that has beautiful white sand beaches, luxuriant green mangroves and a colony of penguins. Activities will include swimming and snorkeling and a climb to the summit of the island for one of the most breathtaking views in all the Galapagos. From the summit you will have the best view of the often-photographed Pinnacle Rock. 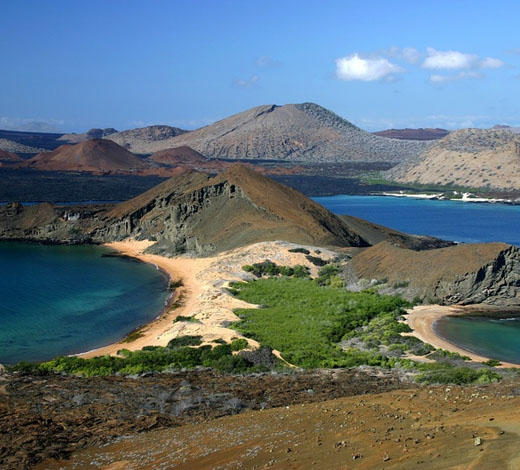 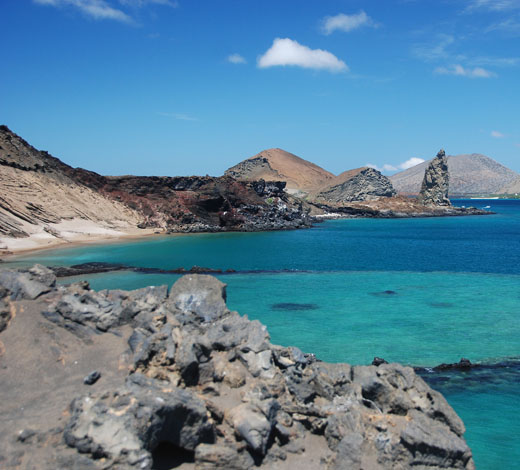 North Seymour is an uplifted (as opposed to volcanic) island and so is generally flat and strewn with boulders. There are good nesting sites here for a large population of magnificent frigate birds. Blue-footed boobies perform their courtship dance in the more open areas and swallow-tailed gulls perch on the cliff edges. Despite the tremendous surf that can pound the outer shore, sea lions haul out onto the beach and can be found together with marine iguanas.

Located on the east of Santa Cruz, the main characteristics on the small island of South Plaza are the Opuntia cacti (The main food of land iguanas) and the carpets of red sesuvium. The island contains one of the largest sea lion colonies of the Galapagos, swallow-tailed gulls and red-billed tropicbirds nesting, and boobies roosting on the south cliff of the island.

The island contains one of the largest sea lion colonies of the Galapagos, swallow-tailed gulls and red-billed tropicbirds nesting, and boobies roosting on the south cliff of the island.

Free day to enjoy the spa, a romantic dinner or just idling by the pool.

After breakfast, private transfer to the airport for your return flight to the Ecuador mainland and your connecting flight home. End of services


End of our services. 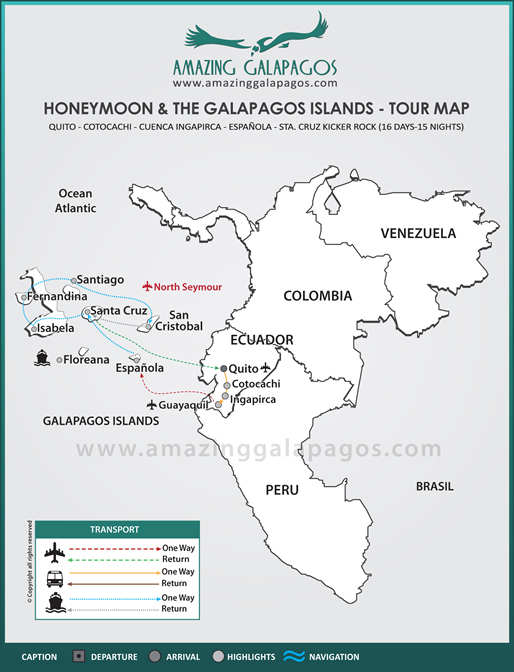