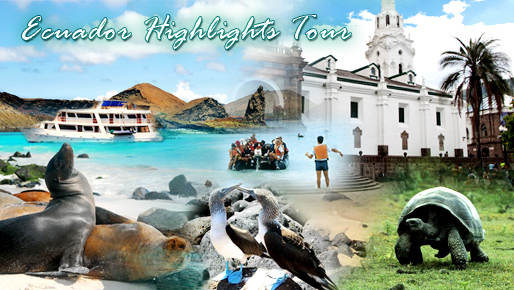 Arrival to Quito. Reception and transfer to your hotel. We recommend the Café Cultura.

Free morning to recover after the long flight. Afternoon half day visit of colonial Quito, declared by UNESCO as a world heritage site in 1978. A visit to the Old Town, including the Plaza de la Independencia; as the President still conducts business here, access to the inside may be limited. It is also the home of the tomb of Sucre and houses interesting 17th and 18th century paintings. A visit to the Parque Alameda that houses the oldest astronomical observatory in South America, as well as an impressive monument of Simon Bolivar. The Plaza de San Francisco which was constructed by the Spanish in 1553 has a high altar made of gold and beautifully carved ceilings. You shall also visit La Compañia, the finest of all Jesuit churches, which although damaged through the years by fires and earthquakes, has since been restored and has a richly sculptured facade and interior.

After breakfast, transfer to the airport for the flight to Baltra. Welcome by the crew of the superior tourist yacht before a visit to the second largest island in the Galapagos, Santa Cruz. With six different zones of vegetation: Coastal, Arid, Transition, Scalesia, Miconia, and Pampa Zones. The lush green scenery of the Santa Cruz highlands is a welcome contrast to the aridity of the lower islands. 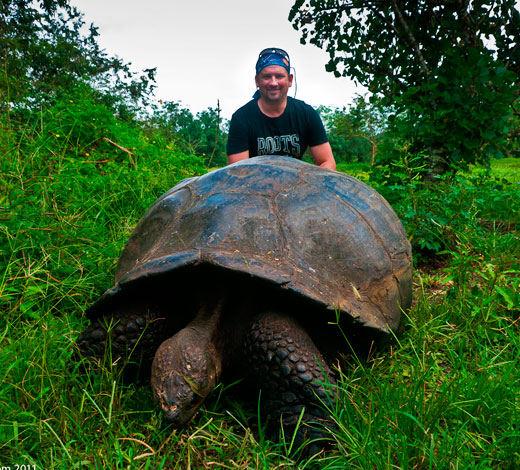 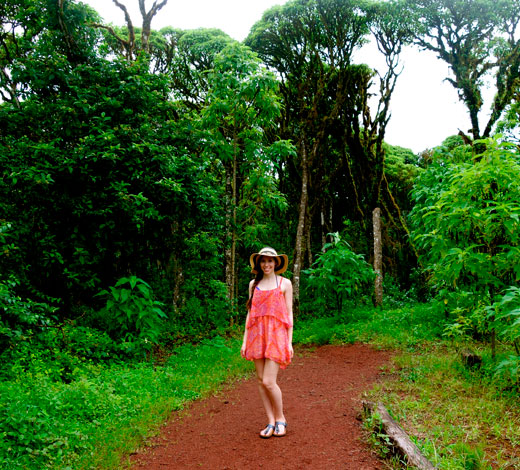 Punta Cormorant offers two highly contrasting beaches; the landing beach is of volcanic origin and is composed of olivine crystals, giving it a greenish tinge. At the end of the short trail is a carbonate beach of very fine white sand, formed by the erosion of coral skeletons; it is also a nesting site for green sea turtles. Between these two beaches is a salt lagoon frequented by flamingoes, pintails, stilts, and other wading birds. An old eroded volcanic cone called Devil's Crown is a popular roosting site for seabirds such as boobies, pelicans, and frigates and it is not uncommon to see red-billed tropicbirds in rocky crevices. The center of the crown is an outstanding snorkeling spot full of sea lions and colourful fish.

Today, we will visit the isolated Española where there is a high percentage of endemic fauna. Gardner Bay, on the eastern shore has a magnificent beach. The beach is frequented by sea lions, and is a major nesting site for marine turtles. Around the small islets nearby, snorkelers will come across many species of fish, turtles and perhaps even sharks. On a trail leading to the western part of the island, several nesting sites of the waved albatross will be encountered. These huge birds nest here from April to December. Finally at Punta Suarez, along with many nesting seabirds there are mockingbirds, Galapagos doves and Galapagos hawks. Several types of reptile, including the marine iguana and the lava lizard, are also inhabitants of the island. Here you may also see a spectacular blowhole, which shoots spray 30 metres into the air.

Today we will pass the shattered rock "Leon Dormido" also known as Kicker Rock, which serves as a nesting place for many sea birds. A visit to the Interpretation Centre at Puerto Baquerizo Moreno before visiting La Lobería, home to a large sea lion colony and nursery. There are frequently dozens of sea lions visible at any time. Low tide is one of the best times to visit however, since it is when the mother's bring the pups into the tide pools for swimming lessons. Here you will see the sea lions, marine iguanas and even giant tortoises.

Our last day on the Enchanted Islands where after breakfast we will visit The Charles Darwin Research Station. The station is also a tortoise breeding centre, where tortoises of different species are prepared for reintroduction to their natural habitats. The most famous inhabitant is probably Lonesome George, the only survivor of this specific turtle species. Transfer to the airport for your return flight to the mainland. Arrival in Quito, reception and transfer to your hotel.

After breakfast, we head south through the avenue of the volcanoes and on towards Cotopaxi National Park. During the drive, we shall see several dormant and active volcanoes, including Pasochoa, Ruminahui and Corazon volcanoes along this spectacular journey. Arrival to Lasso and lunch at the wonderful colonial Cienega Hacienda. After lunch, we shall make a visit to the fabulous San Agustin de Callo Hacienda, at the very foot of Cotopaxi Volcano. The Hacienda was first written about by the Spanish chronicler, Cieza de Leon (1553) and is one of only two major Inca sites in Ecuador. This temple or palace was built around 1440 AD by one of the last Inca emperors, Huayna Cápac, and to this day the remaining rooms prevail as a magnificent sample of the unique style of Inca construction. The site is currently being investigated by Dr. David Brown of the University of Texas, the funding of which was provided by the National Geographic Society. Previously unknown portions of Inca walls and foundations have been discovered throughout the restoration process of the house. Since the 15th century San Agustin de Callo has served as an Inca fortress, Augustinian convent and temporary home of the French Geodesic Mission whose scientific results helped to determine the true shape of the planet. After the visit, a small hike or horse ride in the beautiful countryside in the foothills of Cotopaxi Volcano. Return to the Cienega Hacienda for overnight accommodation.

After breakfast, a visit to one of the many indigenous markets in the areas such as Saquisili and Puquill or time to enjoy the Cotopaxi countryside. Return to Quito and your hotel.

After breakfast, transfer to the airport for the flight to Coca, a 25-minute flight that takes you over the Andes Mountains' majestic snow-covered peaks and down over 8500 feet (2600 meters) into the Amazon Region. The flight destination is the port town of Puerto Francisco de Orellana, locally known as Coca, where you will be met by a bilingual guide and taken to a private dock. Here we will pause for a snack and to use the rest rooms before boarding our covered motorized canoe for a 2-hour, 50-mile (80-kilometer) trip down the sediment-rich waters of the Napo, the largest river in Ecuadorian Amazonia. During the ride it is easy to spot handsome shore birds such as herons, kingfishers, spoonbills and ospreys between the scattered native huts as you travel steadily away from civilization. Upon arrival to the Lodge's 5000-acre (2000-hectare) private reserve, you will take your first walk along a raised boardwalk through dense flooded palm forest from where several species of monkey are often sighted. The path leads to Pilchicocha Lake, a blackwater paradise where you'd least expect to find any sign of people, but dugout canoes (and even paddlers) await to carry you even farther. As you cross the lake, the cries of tropical birds lead you to your final destination and home base for an exciting jungle experience.

Today, you will have a variety of tour options including river trips and further treks into the rainforest. After breakfast, a choice of activities including exploring several trails which lead through pristine terra firme forest, where 150 foot kapok trees tower above and roots form huge buttresses to give trees support. A favorite activity of our guests is to paddle dugout canoes along tannin-rich black-water creeks and lakes, where luxuriant lianas, orchids, bromeliads and palm trees thrive. And wherever an outing may lead the possibilities of spotting animals, from the tiny pygmy marmoset to the feared ocelot or puma are endless. During free time at the lodge, swimming and piranha fishing are also activities not to be missed. For adventurous souls, the day does not necessarily end with dinner. Night walks and canoe trips, with the aid of flashlights, often reveal creatures seldom seen during daylight such as caiman (of the alligator family) and giant insects. 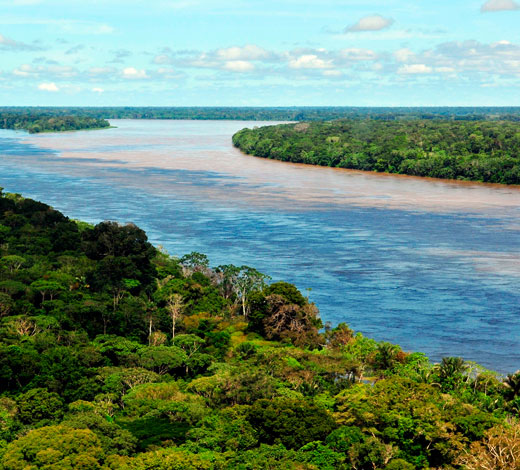 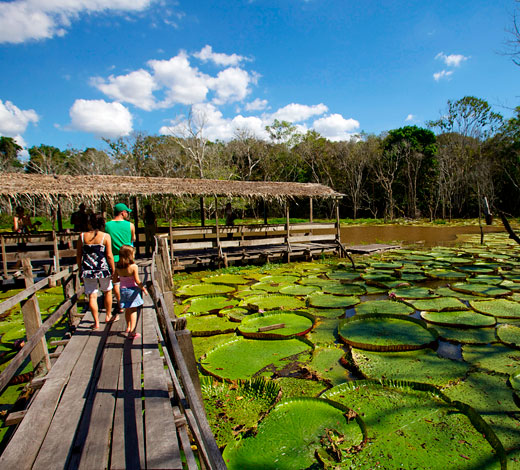 Choose from a variety of tour options

After breakfast, transfer to the airport for the return flight to Quito and transfer to your hotel.

After breakfast, head north in the direction to one of the most prosperous communities in the country, Otavalo where you will find the famous Ponchos' Market, here you can find colourful handicrafts like rugs, clothes, Panama hats, pictures, jewelry, etc. Lunch in the beautiful hacienda Pinsaqui and in the afternoon we will go to Cuicocha Lake, on route we will visit Cotacachi town known for its famous leather handicrafts. We will arrive to Cuicocha that is part of Cotacachi Cayapas Ecological Reserve. This lake lies inside the crater of an active volcano surrounded by native vegetation. This place is considered as a sacred lake and in a certain season of the year the native people celebrate traditional rituals there, to purify and clean their souls. Late afternoon return to Quito to overnight in your hotel.

Transfer to the airport for your flight home.


End of our services. 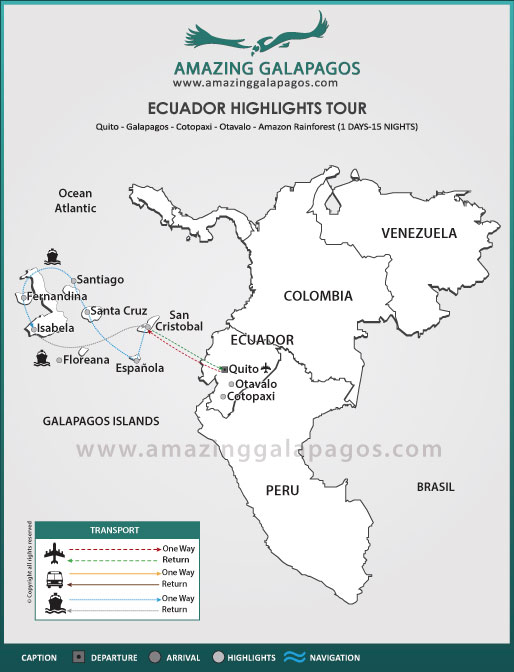