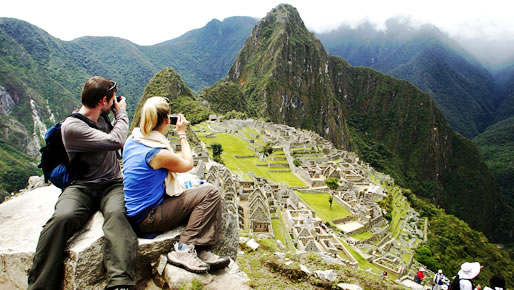 After breakfast, transfer to the airport for the flight to Baltra on the Galapagos Islands. Reception and transfer to the first class Millennium yacht. A visit to the second largest island in the Galapagos, Santa Cruz. The Charles Darwin Research Station and the Galapagos National Park offices are based here. The lush green scenery of the Santa Cruz highlands is a welcome contrast to the aridity of the lower islands. 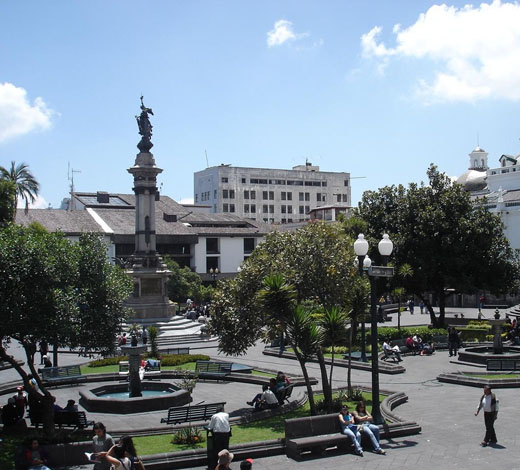 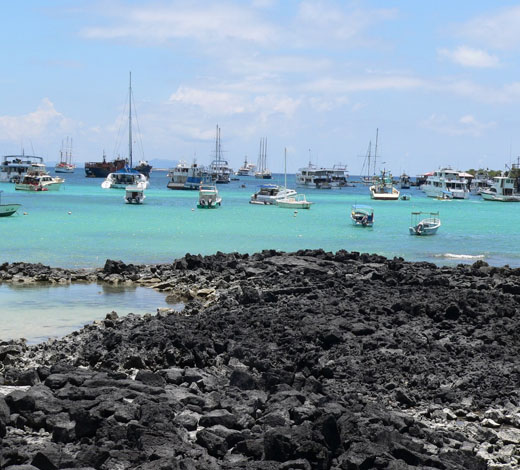 Today, a visit to Puerto Egas on Santiago begins with a wet landing on the dark sand beaches of James Bay. The visit begins with a walk along the rocky coast giving visitors the opportunity to view some of the Galapagos Island's best tidal pools. Sponges, snails, hermit crabs, barnacles and fish including the endemic four-eyed blenny can be seen. A small path will lead to a small lagoon populated with flamingos.

A visit to Tagus Cove located off the west coast of Isabela Island. After a dry landing we can climb up the trail to oversee Darwin 's Lake. This is below the slopes of Darwin Volcano and is, surprisingly, a salt water lake above sea level. The upwelling of coldwater currents in this part of the Galapagos, give rise to an abundance of marine life which, in combination with the protection of the coves, make Punta Vicente Roca one of the archipelago's sough after dive spots. One cove is only accessible from the sea by way of an underwater passage. The passage opens to calm waters of the hidden cove where sea lions like to laze on the beach having traveled along the underwater route.

Before breakfast, we disembark at Bartolome Island for a hike to the summit and a spectacular panoramic view. Later there will be a chance to snorkel with Galapagos Penguins. Continue on to Sullivan Bay, a white coral sand beach and begin your walk over lava that flowed less than 100 years ago. Return to the yacht and head towards North Seymour, an uplifted island which used to be on the ocean floor. Afternoon trip to North Seymour observing bird colonies of blue-footed boobies, frigate birds, and also sea lions and marine iguanas.

A visit to Leon Dormido before transferring to the airport for the flight to the Ecuador mainland. Connecting flight to Lima Peru. Arrival in Lima and transfer to your hotel.

After breakfast, full city tour of modern and colonial Lima, declared a UNESCO world heritage site in 1991. Tour in an air conditioned bus with a bilingual guide. The tour includes a visit to the Cathedral, Main Square, San Francisco Convent and its Catacombs, and the residential areas of San Isidro and Miraflores. Lunch at the internationally acclaimed Rosa Nautica seafood restaurant, strategically located on a pier and extending into the Pacific Ocean. After lunch, a visit to the GoldMuseum. Originally from a private collection, the museum houses numerous gold, silver and copper artefacts from several pre-Hispanic cultures. Return to your hotel. Free evening.

After breakfast, flight to Cuzco, reception and transfer to the hotel of your choice. Afternoon guided visit of the four ruins nearby; the Sacsayhuaman Fortress overlooking the city of Cuzco, a pre Inca architectural masterpiece; Kenko, a rock sanctuary whose main attraction is the monolithic altar representing a puma, the red Fortress of Puca-Pucara and Tambomachay, a beautiful fountain fed by a spring forming a series of basins continue to the city of Cuzco; the Main Square, the Cathedral and the Koricancha or Temple of the Sun. Dinner and folkloric show in the evening. 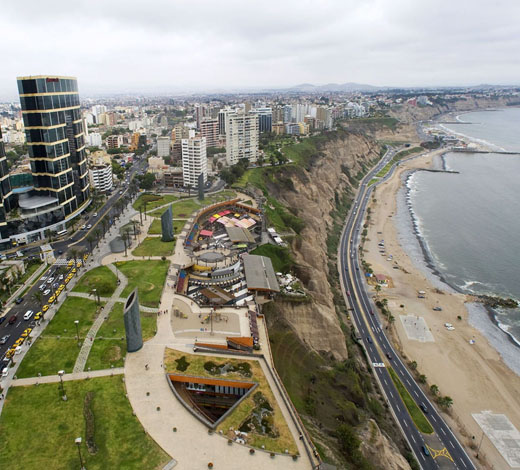 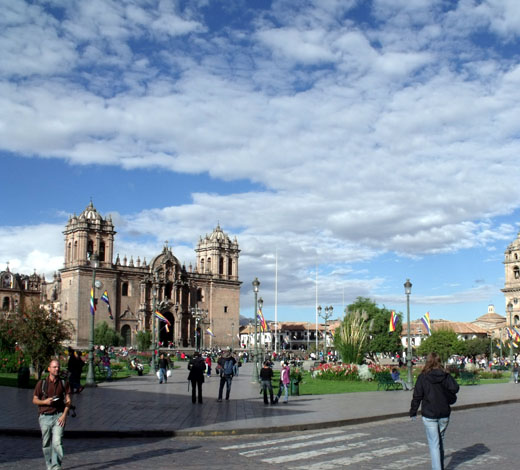 Full-day excursion to Urubamba, the Sacred Valley of the Incas. Visit the village of Pisac, founded during Colonial times. On Sundays, Tuesdays and Thursdays the artisans barter their products. After buffet lunch at the Tunupa Restaurant, a visit to Ollantaytambo, the only Inca town which is still inhabited. Explore the ruins above Ollantaytambo before returning to Cuzco via the traditional market town of Chinchero. Return to your hotel.

An early start by Vistadome train to Aguas Calientes. Guided visit of Machu Picchu, the most spectacular ancient city in the world. After the tour, free time to enjoy this spiritual wonder. Opportunity for a guided trek (approx 1 hour) up to the sungate (Intipunku), which is a part of the Inca Trail, for a magical view of the sanctuary or alternatively an unguided climb to the top of Wayna Picchu, with a magnificent view of the whole Sanctuary (recommended for fit individuals only). Accommodation at the hotel of your choice.

Opportunity to return to the sanctuary for a more personal appreciation of the Eighth wonder of the world. Christmas lunch at the Sanctuary Lodge Hotel located in front of Machu Picchu. Return in the afternoon by train to Cuzco and transfer to the hotel of your choice.

Spectacular first class train journey aboard the Inca Explorer across the stunning altiplano to Puno. Lying on the shores of Lake Titicaca, the highest navigable lake in the world, Puno is also the folkloric capital of Peru. Accommodation at the hotel of your choice. 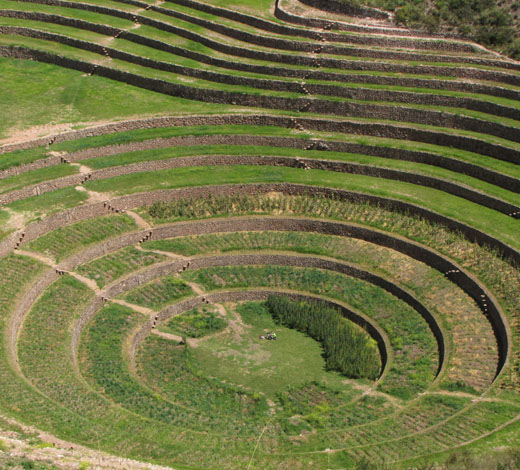 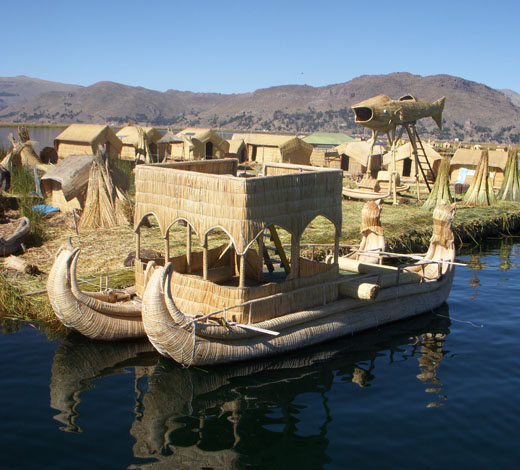 Full day excursion to the islands of Uros and Taquile. Uros, a group of islands made entirely of tortora reeds is home to a small community dating back to a pre-Inca culture. Lunch on the island before returning to Puno and your hotel. Farewell dinner at the Libertador hotel.

After the tour, transfer to Juliaca airport for the return flight to Lima and onward for your connecting flight home. 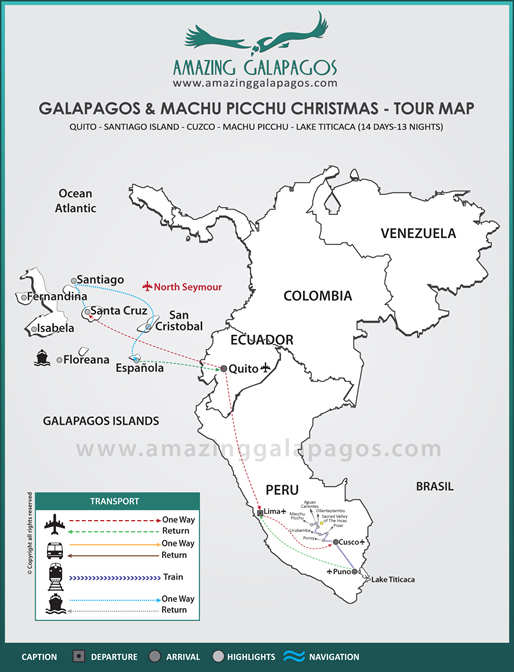